Basic Instinct is a film we’re all familiar with, generally because of the very wild adventurous activity that is the “Leg crossing” scene. Basic Instinct put Sharon Stone on the map, and caused us to get a little more creeped out, by Michael Douglas.

The opening scene we see some “Love making” taking place. Sharon Stone is introducing us, the audience, to her inner cowgirl. Oooja manooj! At the three minute mark, we see her  #freethenipple of  her mighty melons bouncing around in all their glory. Fortunately, it isn’t the only time. During the in bed rodeo session, she pulls out an ice pick and at first I thought it was going to be some sort of kinky sex game but turns out she just wanted to kill him. She stabs the poor bloke to death, which sets up the film.

During the next part of Basic Instinct, we’re introduced to Michael Douglas’s character, who is a cliché cop with drinking problems. Most importantly though, it’s during the next section of film, at the 26 minute mark, we see Sharon Stone getting interviewed by five cops about the murder. At the 26 minutes and 25 seconds is the glory shot where you want to pause. It seemed very fitting that I watched this film on the same day Brazil got knocked out of the World Cup.
All the cops in this scene are naturally taken back by what they see. The best reaction goes to Wayne Knight, aka Newman.

Following this, Michael Douglas’s character gets really worked up and takes it out on his shrink in a rough and freaky way. Turns out he’s been sleeping with her, respect! Big Boys style!

Something happens in Basic Instinct, which I can’t really remember as I was thinking about the rough sex I just watched but Michael Douglas’s character has to follow Sharon Stones character, in what is one of two, car chase scenes. Just a bit more action to get the blood flowing whilst watching the film. Just like our bucks parties get the blood flowing. Yes, that’s a shameless plug… 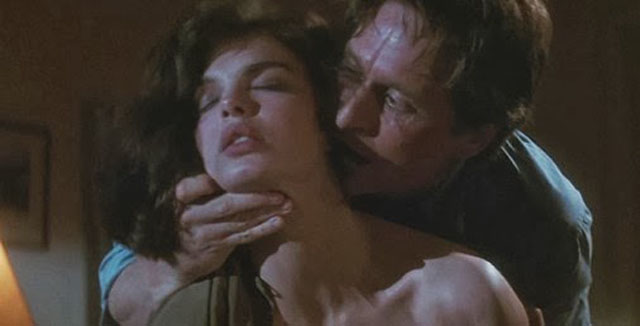 Michael Douglas eventually get’s to her place where he tries to interrogate her. In true Basic Instinct style, she in turn, tries to seduce him. We then get introduced to her “Lesbian Lover”. Once again, respect!
A whole bunch of my stuff happens, which seems kind of pointless, including a random scene at a “disco-tech” where Michael Douglas walks into the ladies toilets, sees Sharon Stone on the toilet doing some drugs, then just watches her. Full creepin style. It then cuts to the dance floor where Michael Douglas demonstrates some weird, awkward, dance moves which somehow wins Sharon Stone over.

He takes her home and “plants the seed”. The next morning he says it was, “The f#ck of the century”. I beg to differ as the sex scene in, ‘Team America’ should really take that title.
There’s another sex scene or two but in the end, it turns out the shrink had been killing a bunch of people. However, the sex scene at the en of the film, with Michael Douglas and Sharon Stone, we see an ice pick under the bed, oooooo.