Many years ago I met Jazzy o. This was before the Big Boys Club was well established, I attended my very first bucks party. The first of my mates was getting married. All the boys were pumped about celebrating the first one of us settling down. None of us had ever really been to any bucks parties, or seen any bucks party strippers before, except for a couple of the guys who had attended cousins or older brothers etc. and kind of been on the outer. This was the first time we had all been celebrating, at one of our own.

How the day this guy met Jazzy O started out.

The day started bright and early. We all met at the bucks house in Ascot Vale for a BBQ and possibly a few too many drinks. By lunch time, we had made our way to Caulfield Race Course for a day at the track. All the boys, and even some of the “oldies”, were reaching the point of no return. We put on a tab at the bar and put on some bets. Most of the day is blurry, for obvious reasons, but I do remember throwing in wads of cash for bets and not getting anything back. After several hours at the races, it was time to head back to Ascot Vale, to sink more piss and enjoy some adult entertainment. Before jumping into cabs, some of the boys got into a bit of an altercation with some other punters. One of the downsides to having your bucks party out on the road.

We eventually got back to Ascot Vale where things got messier. One of the boys went to piss on the fence, forgot to use his hands to lean on the fence and knocked himself out. His missus came and picked him up before the adult entertainment had arrived. Poor bugger. Our last minute booking of a strip show before the main event, wasn’t exactly high end stuff. Without being biased because I obviously work for the Big Boys Club, I can honestly say, our first stripper THAT night wasn’t as good as used toilet paper, by one of the strippers we use! Anyway, she came out with her track marks on her arms, yellow teeth and slurring words with one of the worst routines I’ve ever seen. I might add that during her routine, she attempted to pull off her belt in a sexy manner. I’m not really sure how this happened but when she flung the belt around, the belt buckle came swinging around and smashed me in the head. It cut my head open and there was instant swelling…….on the head, certainly none in my pants. After a short while of watching this girl stumble through a routine, she eventually finished. Time to bring on the main event! Something we had booked months in advance! Jazzy O!! 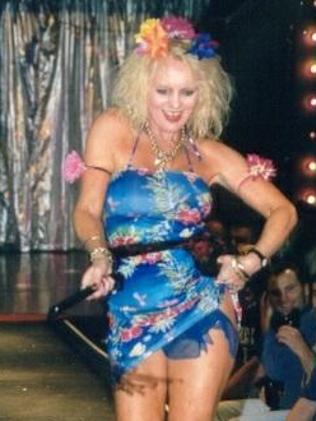 The Late, Great, Jazzy-O. I was one of the many lucky people in Melbourne, to witness this truly legendary performer. Infamous around Melbourne for her jaw-dropping show. I had only heard about the legend, not actually seen any pictures or footage or anything. When she walked in, my jaw actually dropped. She was about 60 at the time and rocked up in a see-through pink dressing gown, with a matching pink bikini underneath. She explained to us all how things were going to work, whilst swearing profusely the entire time. After about ten minutes, she plonked down her bags of goodies and begun. She pulled out a witches hat and slammed it on the floor and asked,
“Who the hell wants to see me sit on this thing?!”
Everybody began cheering or giggling uncontrollably. She then followed up with,
“Hold on, give me a second, this little thing has been giving me the shits all day”
She then pulled a plastic lizard out of axe wound. WOW! Most of the show is a blur to me, to be honest, but I do remember, a bunch of different toys, most bigger then my arm, a cantaloupe, lots of swearing, walking out of the room and walking back in to find the buck rolling around naked, there was whipped cream everywhere and a funky smell.
Unfortunately Jazzy is no longer with us but her legend lives on.

Now back in those days, we didn’t have the luxury of having someone take care of everything for us and I remember the couple of guys who did organise it, being stressed out of their brains trying to scramble together extra money from everyone to organise another stripper etc. Since the Big Boys Club has been going, there has been over a 1000 Melbourne bucks parties organised. I’ve had the pleasure of working around 150 of these myself and although we don’t have the Legend that is Jazzy-O, we do have the best strippers, topless waitresses and jelly wrestlers Melbourne has to offer!