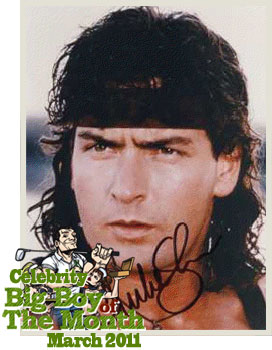 Well, the Royal coronation of the monthly Big Boy occurred this week and it saw Tommy Sera something hard to pronounce rise to his rightful throne; or at least until the end of the month.

One Country, one King! That’s usually how it done, isn’t gents?

Well not this month. We have had word from one of our offshore correspondents that in a little know territory Australia call the “USA” that something is a brewing in the land of Uncle Sam.

In fact they have just announced their big boy of the decade and possible substitute for Barracks for Collingwood Obama.

This humble gent is versed in the mysterious arts of wrong, gee that was fun and where am I.

A man so disciplined in the ancients’ tradition of snap, crackle and pop, they may give him Cuba just for being a top bloke.

You maybe know his uncle you may have used him on you on furniture. Yes he is the graceful enigma, ”rat a tat tat” (that was a drum roll). MRRRRRRRR Carlos Irwin Estevez otherwise known as Charlie Sheen.

We reckon we need to tag Charles with an honorary Big Boy Of The Month before he is gobbled up by this politically correct landscape we call 2011.

Weirdest Place You’ve Woken Up After a Big Night: “Can’t remember, too weird”

Best Way to End a Big Night Out: “Being Charlie Sheen”

Steak or Parma: “Is a parma like a platypus”

Blonde or Brunette: “I will take them both as long as you throw in a red head and a midget”

Boobs or Butt: “Depends on whether I am standing on my head”

Favourite Wine: “CBS executives will pay and then burn”

Favourite Festival: “End of the world party and Charlie Sheens Birthday, yes people that’s me and I am speaking in the third person.”